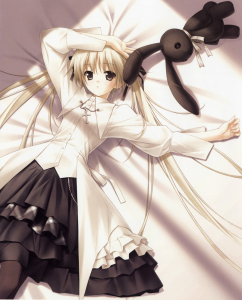 And here we have the final batch. Font attachment issues were found in episodes 5-9 they have been replaced. Since I was replacing a bunch of episodes, I spliced in the episode previews for eps 4,6,9. They are now inline with what was aired on TV. OSTs are in both torrents. If you have old files replace at your discretion, the font issues aren’t major. There are no problems with audio / video.

Here are the correct font attachments. If you have old files and don’t wish to re-download one can just remove the current fonts in the old files and mux in these ones. Due to splicing in of previews on some episodes there will be no patches.

166 Responses to Yosuga no Sora